Saturday 16th May 2009 – the day of the Eurovision Song Contest!

Airport expansion plans across Europe threaten to undermine all our efforts to stop climate change. The aviation industry like to say “if we don’t expand Heathrow, then flights will just go to Frankfurt or Paris”. But that’s not true. Expansion plans all over Europe are opposed by millions of people and they cannot go ahead if we are to make the necessary cuts in emissions that scientists advise.

Join the first simultaneous flashmob across Europe to say no to noise, no to air pollution and no to climate change!

Each airport will sing their entry to the Eurovision Song Contest being held that evening in Moscow as well as other eurovision classics from the past (song-sheets provided!)

Join us! Bring your friends, wear a red t-shirt, bring instruments, download your favourite eurovision song onto your ipod or phone, wear a silly hat or wig, dust off your dancing shoes, let’s party!

See you in Departures at Terminal 1 at 12 noon on the dot!

All over by one o’clock.

Tell BAA to get in tune! No Third Runway!

Reenact some Eurovision classics at the Heathrow Euroflashmob!

At the Euroflashmob each airport will sing their entry to the Eurovision Song Contest being held that evening in Moscow as well as other eurovision classics from the past (song-sheets provided). Here are four of the tunes that will DEFINITELY be sung at the Heathrow flashmob:

This is just the beginning…

Thank you so much to everyone who came to the decision day flashmob today. 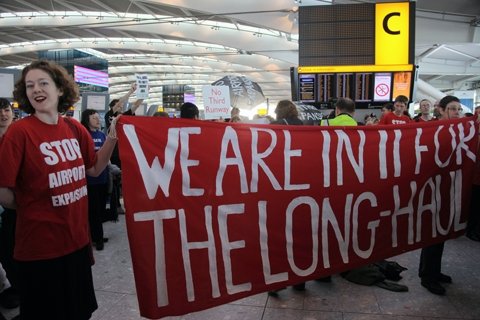 Hundreds of us joined together for an immediate show of force following the Government’s decision on Thursday to approve the third runway. Our message to BAA was simple:

We won’t let you destroy Sipson and put our climate in peril!

The third runway will not be built!

To stay involved in the movement against airport expansion, check out the groups in the links box on the right. 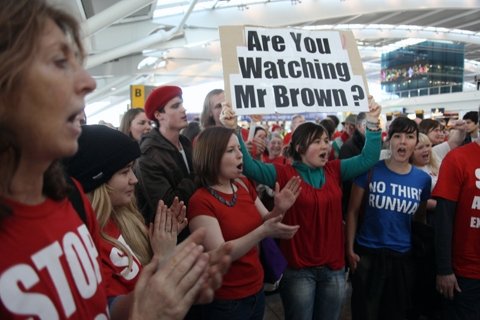 The Heathrow Decision Day flashmob will take place this Saturday 17 January 2009 at 12 noon on the dot, in Terminal 5 Departures (Security North).

Join us to show the Government that we’re in it for the long haul. 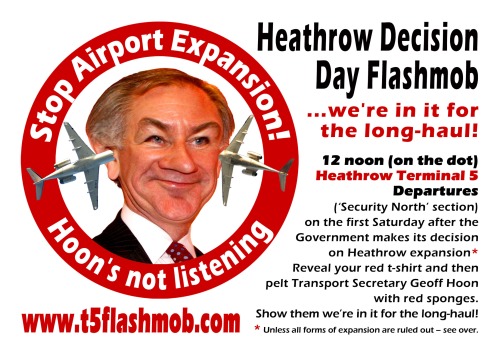 With Geoff Hoon, the new Transport Minister, expected to announce the Labour Government’s decision on Heathrow expansion in December, we’ve announced our plans for a Decision Day flashmob back at Heathrow Terminal 5 – where it all started earlier this year.

Here’s the plan: unless *all* expansion plans for Heathrow are dropped, a Stop Airport Expansion flashmob will take place at Heathrow Terminal 5 on the first Saturday after the decision is announced. We will be unveiling our tshirts at 12 noon (on the dot!) in the departures section of Terminal 5.  Be ready to come!  Red t-shirts are desirable but not essential!

The flashmob will be an immediate chance to demonstrate our feelings if expansion is given the go-ahead – and show that opposition to expansion is not over for the Government by any stretch of the imagination. More details coming soon!

To make sure you get notified about the flashmob, join our low-volume email list by sending a blank email to stopairportexpansion-subscribe@lists.riseup.net

Not a Flash Mob, but……following their hugely successful Climate Rush on Parliament, the Climate Suffragettes invite all of us (men too) to Dinner at Domestic Departures, Heathrow Terminal One, 7pm, 12th January, the day Parliament resumes after the Christmas break.     http://www.climaterush.co.uk/whatnext.html#